Search
Our Mission
The Racial Justice Coalition of San Diego County provides a unified front for advocacy and action against all forms of discrimination and unequal treatment, particularly in our underrepresented and underserved communities.  We specifically strive to challenge and transform the abusive law enforcement practices used in communities of color as we work with organizations and individuals to expose local racial abuses and inequities, and to work to change the laws, policies and unlawful police practices that allow for such abuses and inequities. 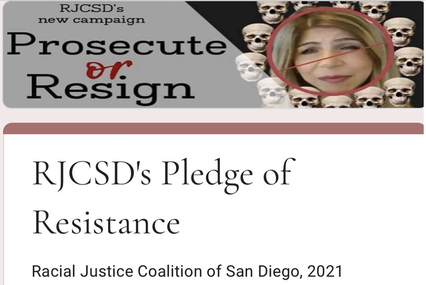 The Racial Justice Coalition of San Diego demands that DA Summer Stephan prosecute law enforcement officers that have brutalized and murdered community members for the last 25 years and for law enforcement that is still engaged in abusive practices and specific incidents of police shootings and fatalities.

There has been a significant lack of oversight of the police and it is time for the DA to step up and take responsibility for police abuse and illegal actions. We have seen a wave law enforcement officers that have been fired and officers that have been arrested and prosecuted. Even though San Diego has experienced incidents of police brutality and excessive force as bad as and even worse than many of these national profile cases, there has still been no police officers arrested and prosecuted for lethal force in the last 25 years!
​